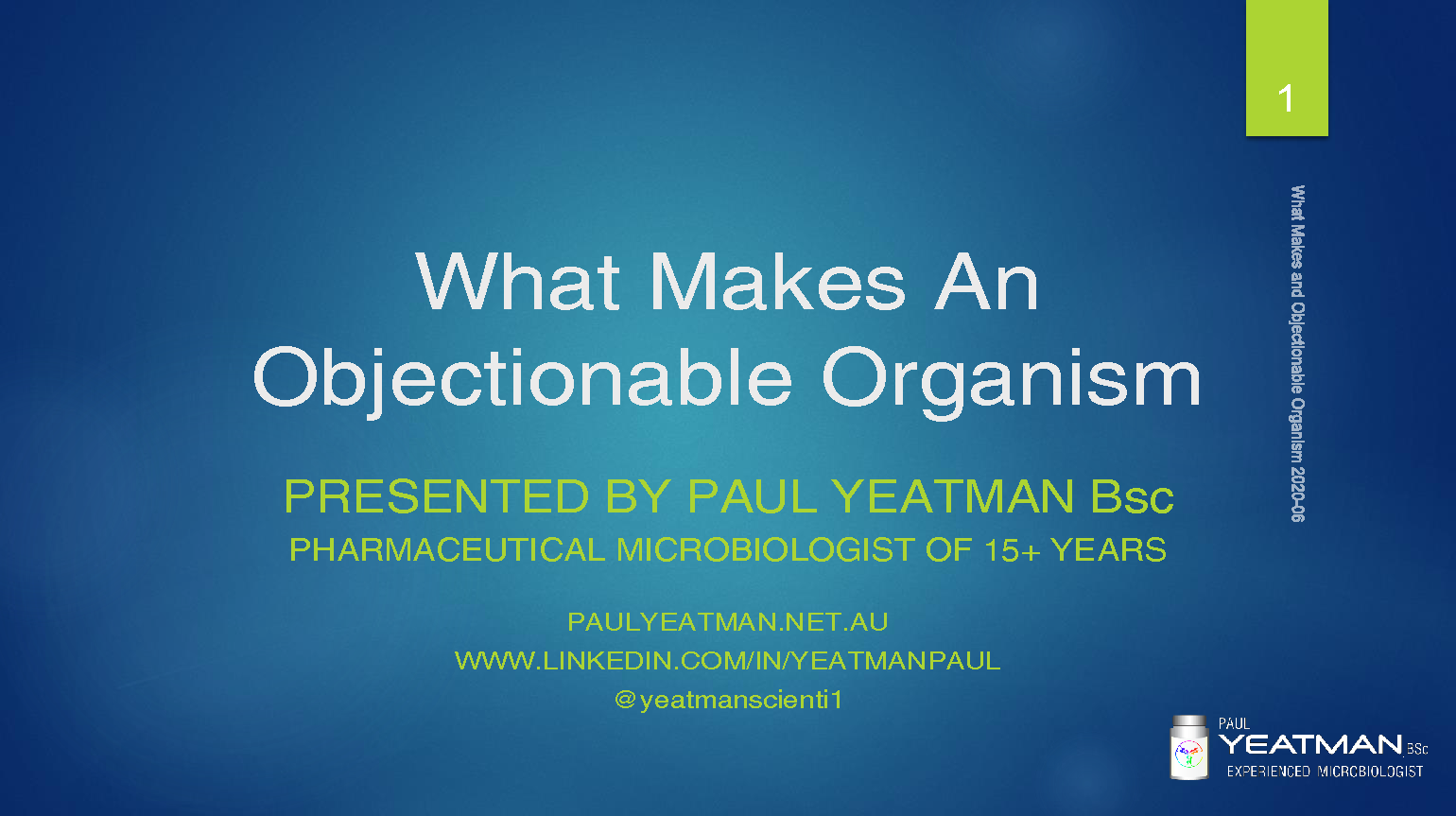 I wrote the first version of this article in 2014 based on training I developed in 2006.   I have updated and reviewed the content to ensure it remains relevant in 2020.

When testing non sterile products, as well as allowed numbers of microbes, there are certain types of microbes that are specified in the regulations as not allowed and still others that can de deemed to be objectionable.

If you work as a microbiologist where you test total microbial aerobic counts (TMAC), total yeast and mould counts (TMYC) and for specific microbes or conduct investigations into the nature of microbes and what impact they may have on the product and the end user, this presentation will benefit you. I will teach you the the following:

What Is A Specified Organism?

A specified organism is one that according to the pharmacopeia, cannot be present in a sample (usually 10g). These microbes are specified either as they may be an indicator organism (a microbe where its presence may indicate a pathogenic microbe could be present) or they may actually pose product safety concerns (whether by reducing the efficacy or posing a risk to the end user).

USP <1111> Microbiological Examination of Nonsterile Products lists several organisms which, depending on the route of administration, can be objectionable in a drug:

The relevant monographs state when these microbes need to be absent   When this is the case this is known as a specified microbe.  This tends to be logical.  For example, Candida albicans may be specified for a vaginal application route, E. coli and Salmonella sp.  could be specified when the product is ingested.  Pseudomonas aeruginosa  and Staphylococcus aureus might be specified for topically applied products.

E.coli though capable of causing disease on its own is typically used as an indicator organism.  The presence of this microbe could mean the product (or sample) has been contaminated with faecal matter.

As well as these stated microbes, any other microbe recovered might be objectionable.

What Is An Objectionable Organism?

An objectionable organism is one that we do not want to see in product based upon:

The PDA defines objectionable organism as, “microorganisms that, due (their) numbers and pathogenicity can cause infection, allergic response or toxaemia in patients receiving the product”.  The PDA also notes that where the product appearance, stability or efficacy can be affected by the microbe, then it is objectionable.

It can be argued that a specified microbe is not necessarily objectionable. All microbes recovered from any TAMC or TYMC test should be identified and examined to determine if they are objectionable.

Determining If A Recovered Microbe Is Objectionable

A non sterile manufacturer should be concerned if microbes that are not specified are recovered during the specified test and they should determine if microbes recovered by the TAMC and TYMC tests are potentially objectionable.   This can be evaluated by reviewing:

Ideally we should be identifying all microbes recovered from both the TAMC, TYMC and specified microbes tests and determine if they are objectionable. Enumerating microbes and identifying non typical colonies may not capture all the microbes present within a sample.

A good reference here is the US FDA’s Bad Bug Book along with the Internet, Bergry’s and you and your company’s product knowledge.

When you recover a microbe your training and experience will give you a good idea if the microbe might cause issues.  As part of your risk assessment and investigation you need to consider such things are:

Recovered microbe count: Is the count above your alert or action level?  Are the number of microbes likely to cause product spoilage?

Preservatives and antimicrobials in the product: Expand on the last slide and in combination with the numbers and types of microbes recovered they could proliferate in the product causing spoilage by using up or deactivating the preservatives.  It is also possible high number of microbes could result in reduced potency of an antimicrobial product.

Validation data: Were the microbes recoverable during the product’s validation studies?  If no, then finding the microbe during testing should cause you concern as how did it get there?  This should be investigated.

Intended use of product and Where the recovered microbe typically causes disease – as discussed in “Determining If A Recovered Microbe Is Objectionable” section.

Historical data of product:  An examination of historical data can show what is typically recovered and incapable of being recovered in a product.  If you suddenly start recovering a genus or species that has never been recovered, it may represent a loss of control in your process, something amiss with the product or stating materials or something even more interesting.  A brand new microbe in your product is certainly notable and it might be objectionable.   An examination of historical data is also important from a risk perspective as it will give you and indication of the likelihood of undetected contamination in past batches and whether or not future batches are at risk of the same contamination.

The Benefits of Knowing The Differences Between Specified & Objectionable Organisms

Being aware that any microbe recovered during testing potentially objectionable is important as people tend to assume specified = objectionable and all other microbes are acceptable.

By examining microbes recovered during TAMC or TYMC testing, one may determine if they are detrimental to the product or patient. This ensures quality products are released to the market that do not have unexpected (or negative) impacts to the manufacturer or the customer.

You will now know the following:

Did you find this informative or useful? Please consider a small donation so I can expand and improve on what I deliver.